Home//Insights//Communications//Oscar Nerves? How to Conquer Your Fear of Public Speaking 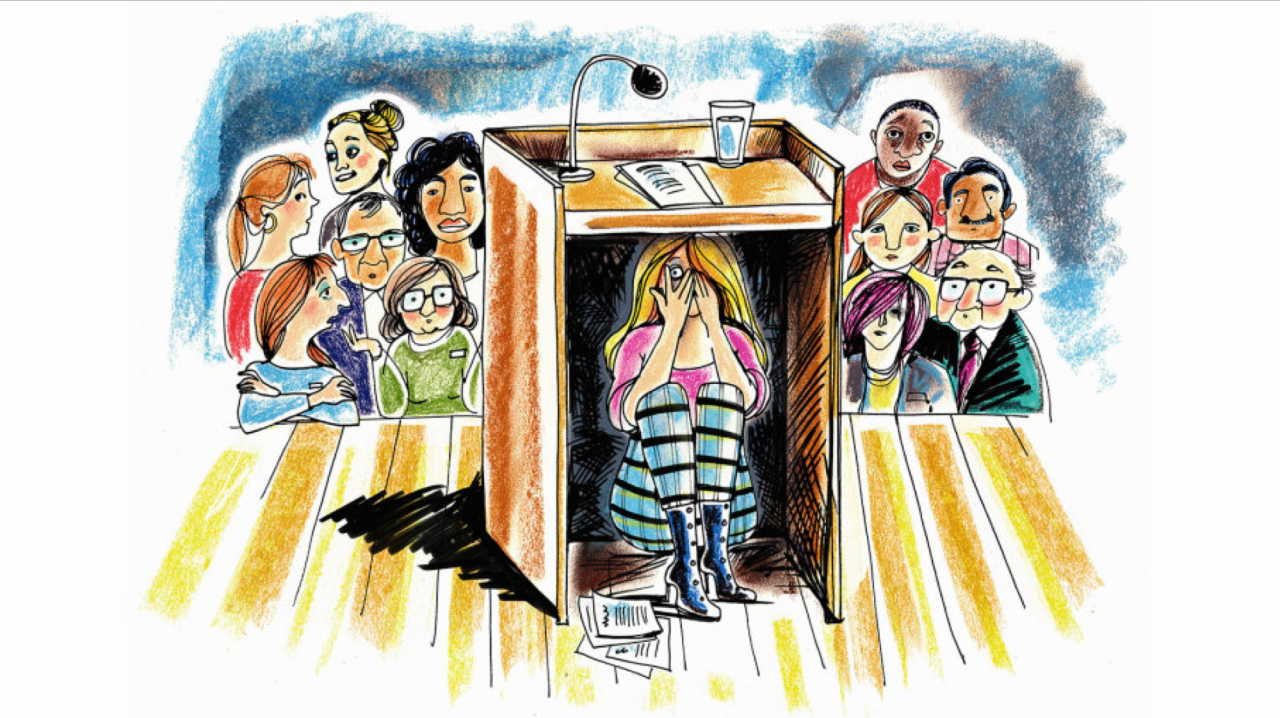 And the Oscar goes to…

This will be the scene today (Sunday, February 9th) at the 92nd Academy Awards in Los Angeles as winners in 24 different categories step up to accept their awards. For the non-actors though, the feeling of walking on to that most public of stages could trigger an adrenaline rush of euphoria and sheer fear.

Public speaking for an actor is like the dirt track to a racehorse. Home. Let’s instead put ourselves in the shoes of the cinematographer, the screenwriter, the makeup artist, costume designer, the sound mixer or the two editors who also nervously await the tearing open of that envelope.

​These are the faces that spend their life – and enjoy that life – behind the camera yet we never see them being interviewed on the red carpet. I bet some are shaking to the core.

Picture the scene. Not this one as Olivia Coleman is majesty personified. Picture the non-actors. As they raise their golden statuette to the audience, a bead of sweat materialises above their upper lip, then another, their heart misses a beat, they can’t feel their feet, a volcano stirs in their stomach and an unnecessarily large timer is staring down. The countdown to the speech begins… 00:45, 00:44, 00:43. They stare deep into the bowels of the Dolby Theatre, a room filled with the most glamorous and seasoned acting talents on the planet and, if that isn’t enough, they are also about to address a cool one billion of the unforgiving public.

Public speaking is regarded as the most feared phobia in the world, topping death, spiders, heights, divorce, moving home, losing your job and giving birth (and no man can fathom that so it’s a silly analogy). It’s also not uncommon. The National Institute of Mental Health Public reports that public speaking anxiety affects 73% of the population. Why so intense? For the simple reason that a lot of us have an inbuilt fear of being judged negatively by our peers.

The medical term, or social anxiety disorder, to describe the fear of public speaking is ‘Glossophobia’, which derives from the Greek ‘glossa’, meaning tongue, and ‘phobos’, fear or dread. Phobia or not, when asked to speak at an event, particularly by your boss, it is never wise to decline. You have been handed an opportunity to shine. Take it and worry later. Between then and the big day, you need to practice, visualize, BREATHE and practice.

Easier said than done but try to visualize success. What does it look like? How will you feel in the conference hall? Don’t dwell on the negatives. This is a chance for you to brand yourself. Harness it! You wouldn’t have been invited to speak if they did not see your potential. Sorry to disappoint – you won’t be perfect.

We all share a love for a good story. Period. Try not to overload on statistics, figures and facts. You are not there to demonstrate your academic intellect. You are there to inform, inspire and, in part, entertain. Storytelling is the essence of that and the audience want to see your natural character up there, the ‘authentic you.’

Be early on the day, walk the stage, feel the arena, visualize a packed audience, hold the podium, BREATHE..

The pace of your first 5-10 seconds is vital. Don’t rush it, speak slower than you think you are. Speak up, be proud and focus on the breath. Always the breath!

You see 1,000 people staring back at you and you feel the ground open up. Don’t let it. Cement your feet, shoulders back, stand tall, take a slow and deep breath, and look out. Remind yourself how much you practiced for this. Take confidence in that dedication.

The voice has obsessed me for years. It is the most powerful muscle in our body and yet we spend the least time training it. You never hear of people going to ‘voice gym’ and yet actors do that almost every day. A listen to Richard Burton’s reading of Dylan Thomas’s magnificent “Under Milk Wood” is, for me, the Olympian performance of voice.

Another great is Orson Welles’s reading of H.G. Wells’s ‘War of the Worlds’. That broadcast, on a Sunday evening in October 1938, was so authentic that radio listeners in the U.S. panicked into believing New Jersey was being invaded by Martians.

Both actors commanded enormous gravitas and power with their voice. They also worked hard at it, practicing for hours a day.

I have been a broadcaster for 20 years and read voraciously on the topic, but I do not claim to be an authority. Instead, let me introduce two experts who are. Greg De Polnay and Caroline Goyder, both based in London, pulled me out of a bind when I was balancing a difficult time personally while anchoring the morning show on Bloomberg TV. Shock affects us in many ways, but the quiver of a voice can be hard to disguise. Greg and Caroline helped steer me through the quicksand. In the cut-and-thrust world of TV news, you step off the carousel and someone is waiting to grab your spot. This shout-out is a thank you to them.

An actor, director of stage and screen, Greg retrained in the 80s as a voice specialist at the Central School of Speech and went on to become the Head of Voice at LAMDA and the Drama Centre, London, and a visiting tutor and director at RADA. www.gdpassociates.com

A trained actress and voice coach from The Royal Central School of Speech and Drama in London, Caroline has dedicated her career to the science of public speaking. In particular, gravitas. She’s even written a book, aptly titled ‘Gravitas’. www.carolinegoyder.com

For those out there who dread that public speaking moment, I hope this helps. Be comforted by the thought that you are not alone. Far from it, there are millions out there wrestling with the same angst. With practice, research, a strong grasp of go-to techniques, you can conquer that nightmare. You can do it. I know you can.

We all have our hit list of leading Oscar moments. For me, top of the charts is Jamie Foxx’s acceptance speech for Ray in 2005. I challenge anyone not to well up when he talks about his Grandmother. He speaks from the heart, means it, turns storyteller and is the authentic Jamie from start to finish.

Other favourites are the speeches by Helen Mirren (The Queen, 2007), John Wayne (True Grit, 1970) and Peter O’Toole’s hilarious yet gracious turn when he accepted the Academy’s Honorary Award in 2003. Prior to that, O’Toole had been nominated, and come up short, a record eight times. Two other examples of public speaking prowess from the Hollywood elite are Sean Connery’s Lifetime Achievement Award in 2005, where he singlehandedly demonstrates the power of the pause.
​
If there was a category for the greatest speech by an actor in a leading role, my Oscar would go to (drum roll) Denzel Washington for his “Fall Forward” Commencement Address to University of Pennsylvania in 2011. Inspirational to the core. Public speaking perfection.